Some of the earliest records of the town, which was then called Wade, from the Old English waed, a ford, mention chapels on either side of the River Camel where travellers could pray for a safe crossing before attempting the tidal ford and give thanks afterwards if they reached the other bank. 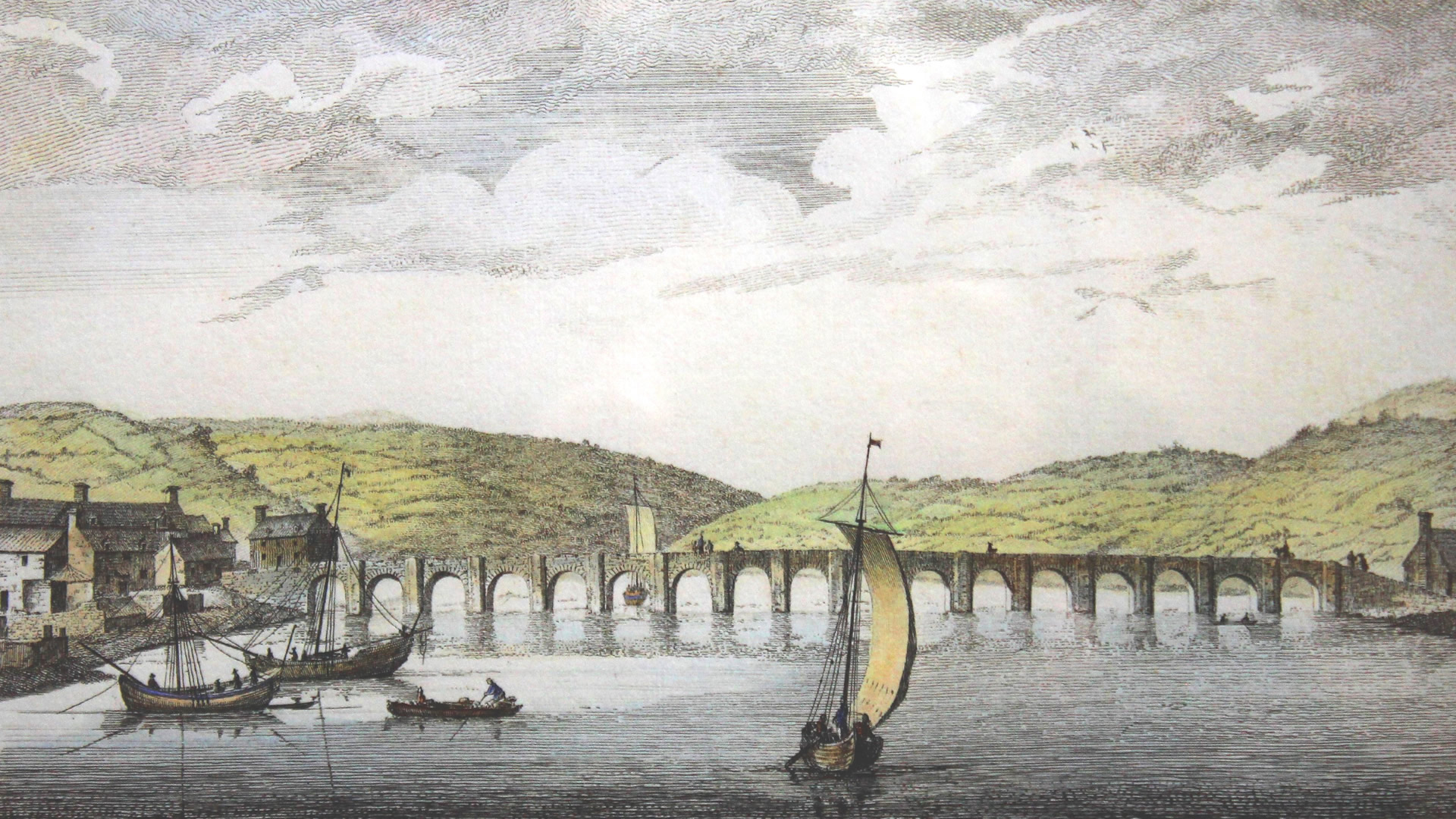 The credit for building the Bridge belongs to John Lovybond, vicar of Egloshayle between 1461 and 1475. He organised the neighbouring landowners to raise the necessary funds and applied to open a quarry for the stone. The local legend is that bales of wool were used to stabilise the deep mud of the riverbed for the foundations of the Bridge, hence the name Bridge on Wool. However an alternative explanation is that the Bridge was built on the profits of the wool trade. The Bridge originally had seventeen stone arches and spanned some 200 metres including the ramp up to the Bridge on the south bank. It carries a sign dating it to 1468, though it probably took several years to build. It was certainly complete by 1478 when a traveller mentioned it. The tower of Egloshayle church was, according to tradition, built with surplus materials raised for the Bridge but not needed.

The Bridge subsequently makes occasional appearances in historical records. In 1542 it was the site of an armed struggle between followers of John Tredenick and George Wolcoke. In 1577 Cuthbert Mayne, a Catholic priest, was executed at Launceston for supporting the Pope against Elizabeth I and the Bridge was one of four locations in Cornwall chosen to display a quarter of his body. During the Civil War, Oliver Cromwell came to Wadebridge in 1646 and held the Bridge with his troops, but the Royalists withdrew without a fight.

In more recent times the records include less momentous events such as the day in 1845 when Wombwell's Travelling Menagerie of wild beasts became stuck on the Bridge, which was only wide enough for a horse and cart. 1845 also saw the first traffic census taken on the Bridge and plans were made to widen it, but these were postponed due to the Great Flood in 1847 and eventually came to completion in 1853, the same year that the trust which had maintained the Bridge was wound up and responsibility transferred to the County authorities. One of their early achievements was to light the Bridge with a single gas lamp.

1901 saw the first motor car recorded in Wadebridge cross the Bridge, an event which inevitably led to further calls for widening, though that did not happen until 1963. Meanwhile, in 1928, the Bridge was scheduled as an ancient monument.

This is a smashing venue just off the main shopping street. It is ideal for a visit to learn about thre local history of Wadebridge. The volunteers who run the place are cheerful and enthusiastic. There are plenty of visual displays backed up by knowlegable staff. It’s ideal for under an hour and open 11-3 Mon - Sat. It’s free but make a donation.

This is a charming and informative local museum. Free to enter, the collection reflects local life and the history of the area. The museum is staffed by volunteers who are friendly and helpful. Free information guides are offered and the volunteers are ready and willing to answer any questions. This is another local museum which relies on donations to keep it running. It is a very dog friendly area and this includes the museum so canine friends are welcome. I spent about 45 minutes here as it is a small museum, but I thoroughly enjoyed my visit.

The Wadebridge and District Museum reopened in 2013 and has a most interesting collection of photographs and artefacts about the history of Wadebridge. It is primarily manned by local volunteers who are able to provide you with not only the past historical details of this Town and about the various industries and businesses that used to be found in this area – but also about the typical life and times of local residents and how it has changed over the years. Recommended as a good starting point for visitors to Wadebridge

it was raining , glad it was or i would not have known how great this place is , finding out about where you are and the history , good fun and great staff to explain things you may not understand ,well worth the visit ,..